What is an ectopic pregnancy? 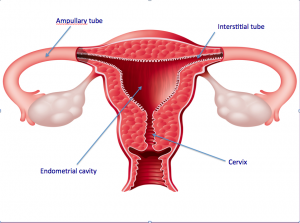 When speaking to patients the term “ectopic pregnancy” is known to most of them – although they are not always clear on exactly what it is.

The diagram on the left is a schematic of the uterus, tubes and ovaries. The normal place for an embryo (early pregnancy) to implant is in the endometrial cavity shown in the picture. A pregnancy is called ectopic when it is located in the wrong place anywhere outside the endometrial cavity (from modern Latin ectopia ’presence of tissue, cells, etc. in an abnormal place’)

The most common place to find an ectopic pregnancy is in the Fallopian tube – which acts as a collecting system for the egg at one end and connects to the uterus at the other. It is here that fertilisation of the egg takes place. Once fertilised, the egg has to travel down the tube before implanting in the endometrial cavity. Anything that hinders its passage can lead to implantation occurring in the tube.

Implantation can occur in other sites. The part of the tube that passes through the muscle wall of the uterus is called the interstitial tube – and ectopic pregnancy occur here as well as in the cervix, the scar left from a Caesarean section, the actual muscle wall of the uterus itself (myometrial), the ovary and even attached to other organs in the abdomen and pelvis (abdominal pregnancy). Ectopic pregnancies that occur in sites other than the Fallopian tube are called collectively “non-tubal” ectopic pregnancies. In general terms these are less common (indeed some are very rare), often cause symptoms relatively late and cause more complications. There will be other posts on this site relating to these in more detail. 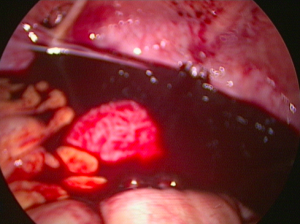 Blood in the pelvis from a ruptured ectopic pregnancy

As can be seen in the diagram above. the Fallopian tubes are much thinner than the muscle of the main body of the uterus, and so if a pregnancy implanting into the tube it is likely to invade into the wall of the tube and at some point as the pregnancy expands the tube will rupture. This can lead to heavy internal bleeding which if untreated can be  life threatening. A view of the pelvis down a laparoscope (an instrument we use to look into the pelvis and carry out keyhole surgery) is seen to the left. You can see in the centre of the picture the uterus (womb) is almost covered in blood. A women with this problem is likely to feel weak and dizzy, may have shoulder tip pain, and certainly have abdominal pain. By the time an ectopic pregnancy reaches this stage surgery is the only option and the situation is dangerous until an operation has been carried out to stop the bleeding.

Fortunately this situation is not how most ectopic pregnancies are seen these days. Some are picked up even before there have been any symptoms and others after only minimal problems such as menstrual like spotting or mild pelvic discomfort.

In these circumstances the tube will not be so swollen and significant bleeding will not have occurred. As a result treatment options other than surgery are possible. Some of these ectopic pregnancies will resolve without the need for intervention. Some will respond to an injection with a drug called methotrexate whilst others will need surgery. A typical example of this type of tubal ectopic pregnancy is seen immediately below and to the left. You will see there is a very slight swelling of the tube just to 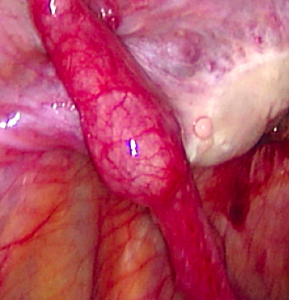 Slight swelling in the Fallopian tube from a small ectopic pregnancy

the left of the white structure which is the ovary. When detected at this early stage in the disease process the options for treatment are greater and certainly more conservative. How ectopic pregnancies are treated will be the subject of another post on this website. By far the majority of ectopic pregnancies today are detected with transvaginal ultrasound. There are a number of academic papers on this subject. Two from our group show that over 70% of ectopic pregnancies are seen on ultrasound on the first scan and well over 90% before surgery (some ectopic pregnancies need more than one scan to be detected). These papers by Kirk and Condous respectively can be seen at the following places: http://www.ncbi.nlm.nih.gov/pubmed/17855406 and http://www.ncbi.nlm.nih.gov/pubmed/15695311

My impression as a clinician is that as we have got better at detecting ectopic pregnancy and more conservative treatment options have become available, both clinicians and patients have started to become a little complacent about the dangers of this condition. This is a mistake. Probably most cases of ectopic pregnancy in the UK at the moment are treated with surgery. However a number are treated as outpatients. We also manage as outpatients pregnant women classified as having a pregnancy of unknown location or PUL (see further article on this subject on the website), and whilst only 10 to 20% of women with PUL have an ectopic pregnancy they too must respect the possible risks. In order to look after people properly  we rely on women to take responsibility and tell us if their condition changes so we know when to intervene. So if you are told you have an ectopic pregnancy and are being treated with drug treatment (methotrexate) or the clinicians are waiting to see if it resolves without doing anything, you must take care and ensure you report back to hospital if you have problems. If you are being managed in this way the hospital should have given you contact details in the event this happens. You should have someone at home with you and you must have a plan as to how you would get back to the hospital if you need to. It is absolutely not a good idea to carry on with holidays to exotic and remote islands, take long haul flights or go skiing – all of which I have seen happen in these circumstances!

We will discuss the features of non-tubal ectopic pregnancy, treatment for ectopic pregnancy and its long term consequences in separate articles. I am also hopeful that I can persuade Andrew Horne who is a world expert on the subject to contribute a piece on the reasons why ectopic pregnancy occurs in the first place. Andrew, if you are reading this you know an email is coming your way soon.

Professor Tom Bourne is Adjunct Professor at Imperial College London, and Consultant Gynaecologist at Queen Charlotte's and Chelsea Hospital. He is also visiting Professor at KU Leuven, Belgium. He has extensive clinical and research experience in early pregnancy care as well as gynaecological ultrasound. He has published over 300 academic papers with an H-index of 63. He advises NICE, is trustee of the ectopic pregnancy trust, President of the UK association of early pregnancy units (AEPU) and on the board of ISUOG. He has a private practice at The Women's Ultrasound Centres at 86 Harley Street and Parkside Hospital in Wimbledon.
View all posts by Professor Tom Bourne →
This entry was posted in Diagnosis, Diagnosis and treatment, News and tagged ectopic, ectopic pregnancy, laparoscopy, methotrexate. Bookmark the permalink.